Their material: Potted Potter—a comedy sketch-meets-improv theater centered on spoofing all seven Harry Potter books in one show. Since Dan and Jeff are busy with their New York tour, they auditioned hundreds of guys to find the best two chaps to do the Manila tour. British comedians Jesse Briton and Gary Trainor landed the gig.

On Tuesday’s opening night, I was in the audience laughing with my fellow muggles, plus a few adorable young wizards wearing their Gryffindor robes and waving their wands.

Not to be confused with Darren Criss’ A Very Potter Musical, also an unofficial parody, Potted Potter is a two-man show where Jesse and Gary spoof as many characters as they could in one hilarious night.

As a Harry Potter fan, I enjoyed the duo’s inside jokes and comic references to all things Hogwarts. Jesse and Gary also did their homework by peppering their lines with a few Filipino cultural allusions, much to the delight of the mostly teenage and family audience. The two would often break the fourth wall and even managed to pull off a crazy game of Quidditch in the theater.

Now excuse me while I eat a chocolate frog. 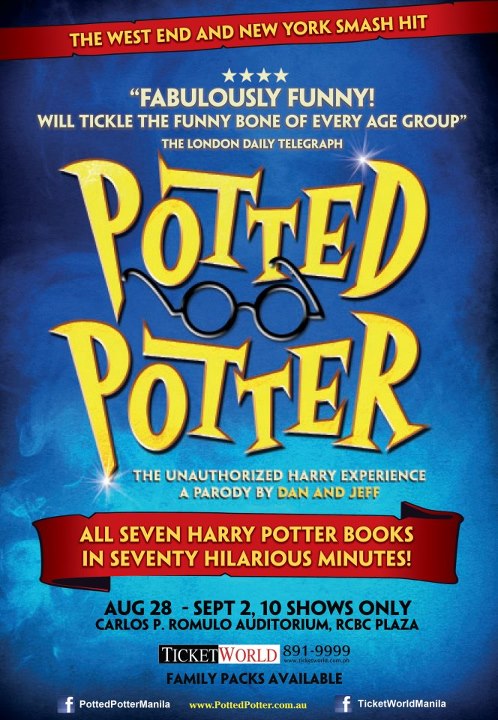 After sold out houses for its first season last August, Potted Potter, The Unauthorized Harry Experience – A Parody by Dan & Jeff, will return to Manila on January 30 to February 3, 2013 at the Carlos P. Romulo Auditorium, RCBC Plaza for 9 shows only!