Yoga For a Cause

How serendipitous that I chose to stay at The Farm on November 6 to 12. Not only was I there in time to celebrate The Farm’s 10th anniversary and the opening of their new Narra Villas, I was also there on the same weekend that yogi Roland Dela Cruz culminated his yoga journey called, “My Global Mandala.” 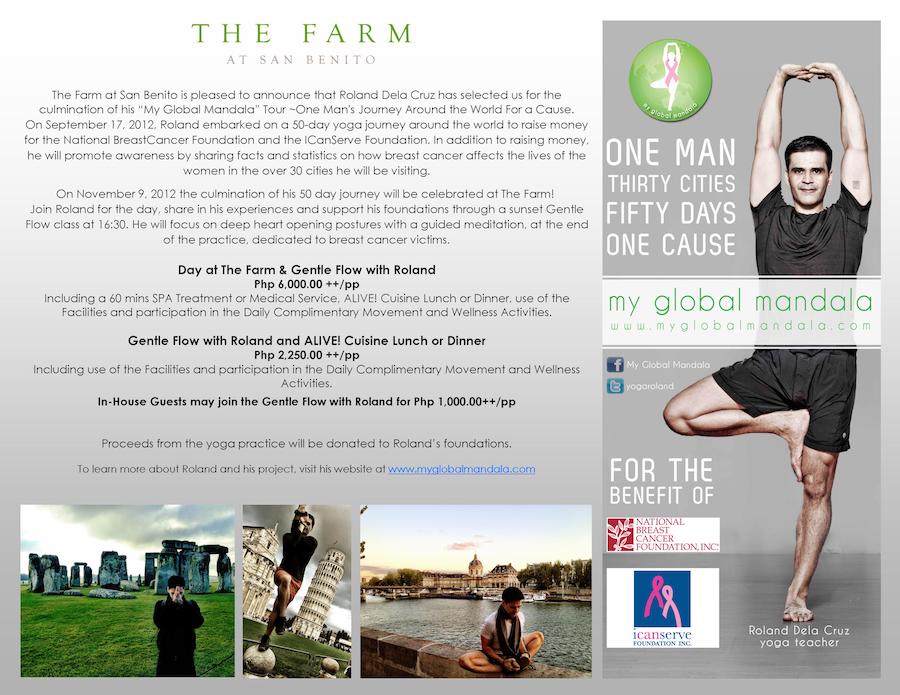 For 50 days, Roland visited 30 cities all over the world to raise money for the National Breast Cancer Foundation and ICanServe Foundation in the Philippines. His sister, Christina, is a breast cancer survivor.

Born and raised in Guam, Roland discovered his passion for yoga in 2001 after the practice helped him get through a period of emotional turmoil. After learning and teaching yoga in Guam and Mexico, Roland moved to Manila in 2009 and opened the first Bliss Yoga studio in Makati with business partner Glenn Biscoe.

Roland chose The Farm in San Benito, Batangas as the last stop of his project because it was the special place where he took Christina to relax and cleanse her system after 17 long months of medical treatment. Just like me, Christina found peace and healing at The Farm.

I was one of the seven people who signed up for the sunset yoga class on November 9. With The Farm’s amphitheater as the venue, we experienced a spectacular Batangas sunset surrounded by nature while doing gentle yoga poses with Roland. It was one yoga class for the books.

I’m proud to be part of this experience even if it wasn’t originally in my plan. I shall be sharing more photos as soon as Roland posts his blog entry from that day. Namaste.