10 Great Fake Quotes That Fooled Me

I like inspirational quotes as much as the next person. But before I use one to caption my latest Instagram post, I do some research first. In the same way there’s an abundance of fake news, there are hundreds of fake quotes circulating online.

Some say that it’s harmless to assign fake quotes to famous people as long as it’s inspirational. I disagree. In the long run, fake quotes can potentially distort the image of the attributed person and the principles they believe in. This also goes against my journalistic training in fact-checking.

Here are 10 inspiring quotes that broke my ego when I found out they’re fake. 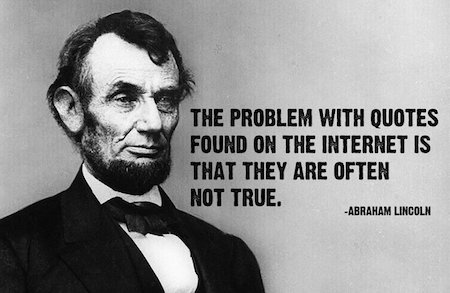 1. ❎ “If you can’t handle me at my worst, then you sure as hell don’t deserve me at my best.” -Marilyn Monroe

✅ Reality check: This quote is so sassy that it’s printed on mass-produced coffee mugs and posters worldwide. Not only is this one of the most overused quotes girls place in their Tinder bio, it’s also something that was never uttered by Marilyn Monroe. There’s a long list of fake Marilyn quotes that people continue to fall for. Click here if you’d rather go straight to her real quotes.

2. ❎ “Once a year, go someplace you have never been before.” -Dalai Lama

✅ Reality check: I was gullible. After seeing this quote, it immediately became my travel mantra (It still is). You’ll find it in #16 of “The Dalai Lama’s 18 Rules For Living,” which, unfortunately, was not written by the famous Tibetan Buddhist. While it has survived the pre-Facebook world of chain letters and continues to take over social media, “The Dalai Lama’s 18 Rules For Living,” together with the equally famous “The Paradox Of Our Time,” did not originate from His Holiness.

3. ❎ “Insanity is doing the same thing over and over again and expecting different results.” -Albert Einstein

✅ Reality check: I’ll never forget how my friend nearly won the school council Presidency when she used this quote in her speech. According to Quote Investigator, “there is no substantive evidence that Einstein wrote or spoke the statement above.” Many scholars have also come to the conclusion that the true source of this quote remains unknown. 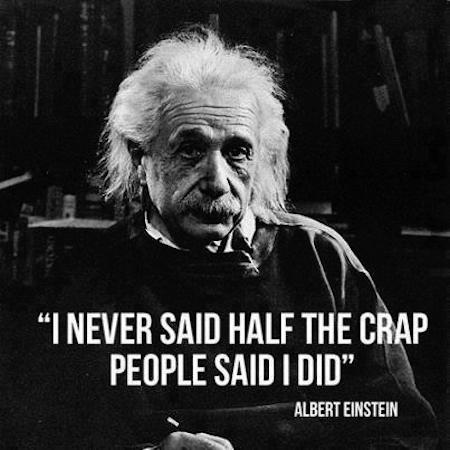 5. ❎ “Three things cannot be long hidden: the sun, the moon, and the truth.” -Buddha

✅ Reality check: Gautama Buddha has been misquoted, misattributed, and inaccurately paraphrased so many times that his fake quotes have even made it to published books. This quote is actually paraphrased. Its origins are from a longer version of Buddha’s writings, but oversimplified with the original essence almost lost. Read the full text here. For a source of real Buddha quotes, click here.

6. ❎ “Be who you are and say what you feel because those who mind don’t matter, and those who matter don’t mind.” -Dr. Seuss

✅ Reality check: There is no historical record of Theodor Seuss Geisel saying that, among many other false quotes fans attribute to him.

7. ❎ “I disapprove of what you say, but I will defend to the death your right to say it.” -Voltaire 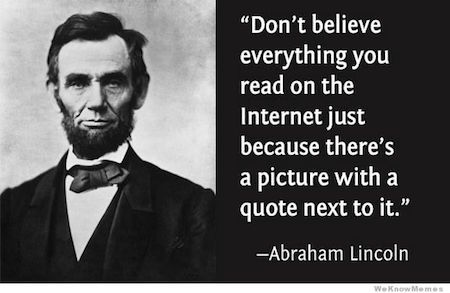 ✅ Reality check: I first heard these words uttered by Bugs Bunny in a retro cartoon. Bugs was campaigning against Yosemite Sam who rebutted with, “Well I speak loud, and carry an even biiigger stick!” Looney Tunes aside, 26th US President Theodore Roosevelt made that saying famous. While he did utter those exact words, he himself admits it originated from an African proverb. Click here to read other fake quotes attributed to American presidents.

9. ❎ “I believe that happy girls are the prettiest girls.” –Audrey Hepburn

✅ Reality check: Among all the fake celebrity quotes circulating Pinterest and Twitter, this one not said by Audrey Hepburn takes the cake. The long version is:

While it’s a cute speech, there is no documented proof that she ever said this. Do you honestly think that someone born in 1929 would use the phrase “best calorie burner?”

10. ❎ “We are all a little weird and life’s a little weird, and when we find someone whose weirdness is compatible with ours, we join up with them and fall in mutual weirdness and call it love.” –Dr. Seuss

✅ Reality check: The Quote Investigator’s study on this famous love quote reveals no written or historic evidence tracing this back to Dr. Seuss. Among all the fake quotes I fell for, this one broke my heart the most!

How to prevent yourself from falling for and spreading fake quotes:

✅ Google, my friend. A quick visit to Quote Investigator, Search Quotes, Phrase Finder, or Snopes will let you know where the quote really originated from.

✅ Once you find out that it actually wasn’t said by that famous person, and you would still like to use the quote, just retype and attribute it to the right person. If you can’t trace the originator, then credit the most prolific scribe in the universe: anonymous.

✅ Sadly, not all quotes listed on goodreads.com and brainyquote.com are accurately attributed. Research before your retweet.

Which fake quotes are you guilty of spreading?