Confused About The National Museums? Here’s a Mini Guide

If you’re thinking of visiting the newly renovated National Museum of Natural History in Manila, you might find yourself confused about the complex for three main reasons:

2. If you’re a Filipino like myself and you grew up visiting the museums in Old Manila as part of your school field trips, note that these museums underwent several name changes (which I will discuss below). When I researched and wrote about them for a travel magazine, I too was confused by the name changes. In fact, whenever I browse through Instagram and look at the hashtags and captions, I notice that people are still confused because they often tag the wrong museums. 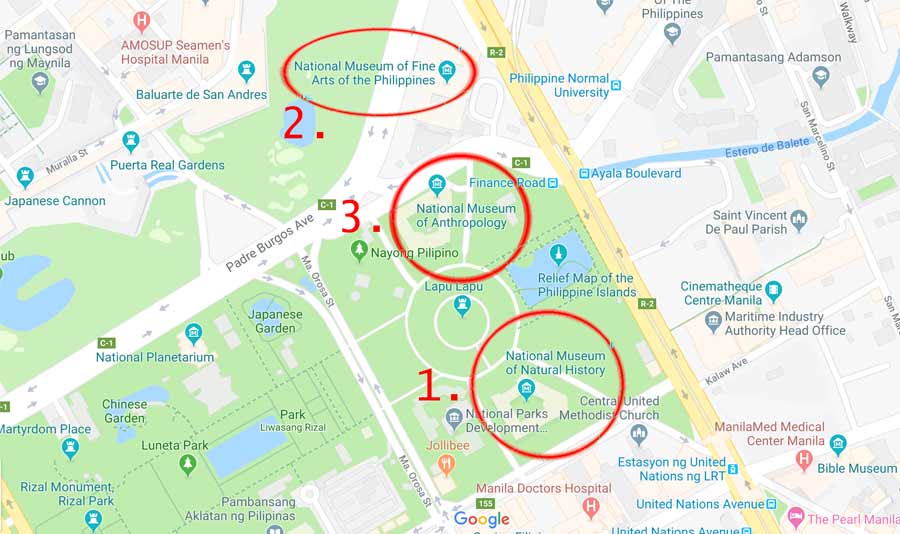 To make things a little less confusing for you, here’s a mini guide.

Formerly called: Building of the Office of the Secretary of Agriculture and Commerce

Quickie: It was originally constructed as the Agriculture and Commerce Building by Filipino Architect Antonio Toledo in 1940. Dominic Galicia Architects won the pitch in 2013, beating four other firms vying to reconstruct the building. The billion-peso project was finally unveiled to the public on May 18, 2018.

Highlights you may recognize from social media or your school field trips:
• Tree of Life, a central elevator system inspired by the double-helix DNA
• Replica of Lolong, the world’s largest captive crocodile that measured 6.17 m long
• Skeleton remains of Lolong
• Submarine with replicas of underwater creatures dangling from the ceiling

Kate’s tips: If you hate long lines, go on a weekday at around 10am. Leave your selfie sticks, backpacks, and big bags at home (not in the car, as thieves may break your window!). There’s a separate long line where you need to check in your big bags, umbrellas, and bulky camera gear.

Posted by National Museum of the Philippines on Sunday, 22 July 2018

Quickie: It was originally designed as a public library by by Ralph Harrington Doane, the American consulting architect of the Bureau of Public Works, and assisted by Antonio Toledo. Construction began in 1918, and unveiled to the public in 1926. The 1934 Constitutional Convention was held in this building. It was reconstructed in 1946, a year after the bombing of Manila. The senate moved out of the building in 1996, and renovation started in 2003 to transform it into the National Art Gallery.

Kate’s tips: Brush up on your knowledge on 19th century Filipino artists such as Juan Luna, Fernando Amorsolo, and Felix Resurreccion Hidalgo, so that you’ll appreciate their artworks more when you see them in the museum.

The NM welcomes Señora Ester de Frutos, Curator of El Museo del Prado.In the country on the occasion of the…

Posted by National Museum of the Philippines on Friday, 9 June 2017

Quickie: This museum division was founded in the early 1900s, but the records were destroyed by World War II. The museum was revived in the 1960s, thanks to Dr. Robert B. Fox, chief anthropologist of the National Museum who discovered the fossilized Pleistocene skull of the oldest man in the Philippines inside the Tabon Caves of Palawan. Several other archeological digs and discoveries have been displayed in the museum.

Highlights you may recognize from social media or your school field trips:
• An Ifugao house model in the courtyard
• San Diego shipwreck, a Spanish galleon that sank off Fortune Island in Batangas in 1600
• Fossilized Pleistocene skull of the oldest man in the Philippines

Kate’s tips: Whether you’re a foreign tourist in Manila for the first time or a Pinoy looking to rediscover your roots, this museum will help you appreciate our diverse ethnicities. Check out Filipino artifacts such as weapons, household tools, and musical instruments from decades to centuries past.

Posted by National Commission for Culture and the Arts on Thursday, 29 June 2017

Open Tuesdays to Sundays, 8:30am to 4:30pm.
Gallery is free. Ticket rates for planetarium shows: ₱30/student, ₱50/adult, and ₱40/senior citizens and PWD.
Children below 4 years old will not be admitted to the Planetarium show.

In the same way the Jonas Brothers (shout-out to the millennials loving this reference!) had a Bonus Jonas—Kevin, Nick, and Joe’s little brother named Frankie, who they didn’t want to feel left out of the trio circa 2005—the National Museum Complex also has a little brother in the area.

Posted by National Museum of the Philippines on Thursday, 18 June 2015

The National Planetarium, also known as the National Museum Planetarium or NM Planetarium (so many nicknames, just like his three older brothers!) was put up in 1975. Growing up, I remember this place going through several closures and re-openings. The 16-meter dome is located in Rizal Park between the Japanese Garden and Chinese Garden on Padre Burgos Drive, a short walk from his older bros.

To those who have been to all the museums, which one did you like the most? Share your thoughts in the comments section below. While you’re at it, tell me who your favorite Jonas brother is. Mine is Nick.