A teenaged boy dressed in basketball shorts and a t-shirt was hanging out at the basketball court of Spring Lake Community Fitness and Aquatic Center (SLCFAC) in Michigan. He had just come from running at the oval on the second floor and was shooting hoops alone at one end of the basketball court.

It’s 10 a.m. and the basketball area was temporarily turned into a badminton court, except that the net was slightly lowered, and the players used bigger wooden paddles. Instead of a shuttlecock, they were hitting a perforated ball made of polymer.

One of the senior-aged players noticed the boy watching their game intently, so she asked: “Would you like to join us?”

The high schooler said yes, and he played with them for the next hour as the other players explained the rules of the game as they went.

“See, it’s kind of like badminton and tennis,” one said. The boy nodded, quickly scoring points for his side of the team and slowly getting the gist of the game.

This is how my foster Mom, Cherry, got to know the game of Pickle-ball. She and her husband Tom of Nunica, Michigan, were new members of SLCFAC when they saw a couple of people playing a curious game at the basketball court. 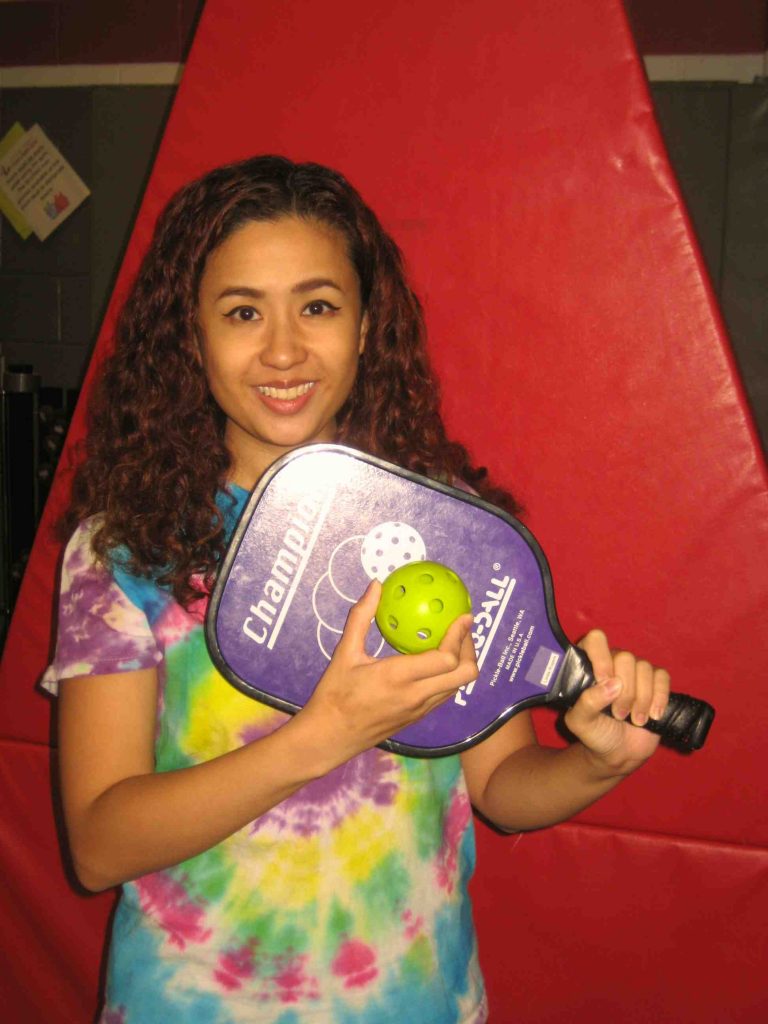 They soon found themselves hooked and began playing regularly from 9 a.m. to 12 noon during weekdays with newfound friends at the center. They even purchased their own paddles and organized friendly matches.

I was introduced to Pickle-ball during my first visit to Michigan in March. Out of shape, I tried my best to pick up the rules of the game and learn to serve properly. I’m a leftie. I was up against Michigan residents who were more than twice my age, and I easily tired out while they were just warming up. It’s not as easy as it looks.

Pickle-ball was invented in 1965 in Bainbridge Island (near Seattle, WA) when congressmen Joel Pritchard, William Bell, and Barney McCallum came home from a game of golf one day. To give their kids something to do during the summer, they created a game using Ping-Pong paddles and a wiffle ball, and lowered the net on their badminton court.

They came up with the rules of the game as they went, and soon both kids and adults got hooked on the game. They began customizing their own paddles and the game started spreading around the neighborhood by word of mouth. In 1972, Pickle-ball was officially incorporated in the US as a sport, and you can now buy official gear such as paddles, nets, and balls online and in stores.

There are two stories circulating about the origin of the name Pickle-ball. The more popular one is that it came from the Pritchard family’s dog Pickles, who loved chasing after the ball. Other sources claim that Pickle-ball was actually derived from the term “pickle boat,” which is last boat to return with its catch of the day.

Whatever etymology you believe, Pickle-ball is a rousing game that, although isn’t as globally popular as basketball or tennis, burns the calories and provides hours of good, clean fun, as I came to learn during my visit in Michigan.