10 Signs You’re Having a Filipino Christmas

2. Planner mania. “Oh, is it toffee nut latte season already?” Ever since Starbucks launched their first planner many years ago, caffeinaholic Filipinos have been spending their hard-earned cash on cups of holiday-themed coffee that come with stickers. If you collect enough stickers, you may claim that free planner. Other cafés have followed suit, and there’s a growing number of planners that cater to every personality. The first thing you will see when you enter Fully Booked or National Bookstore these days is—you guessed it—a huge display of planners.

3. Parol. We may not have a white Christmas, but malls and villages are filled with Christmas trees, lights, and decorations that are very Filipino, such as the ubiquitous parol (lantern) and the Belen or nativity scene. 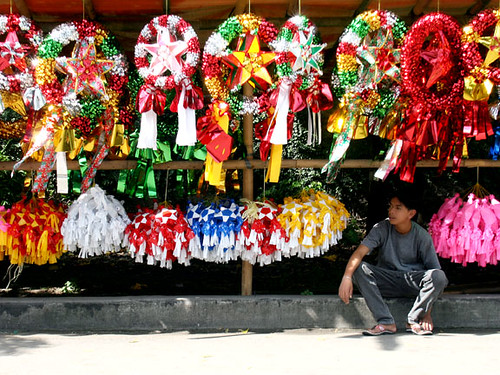 5. You wake up earlier than a call center agent on graveyard shift. Catholics attend nine masses, better known as simbang gabi (night mass) held from December 16 to Christmas Eve. It usually starts 4 a.m., but in my neighborhood I’ve been jolting up to the sound of the church bells ringing at 3 a.m. Devotees believe that their specific prayer or wish will be granted if they complete all nine masses.

6. Carmageddon. Mall hours have extended to midnight, there are sales and discounts everywhere, and bazaars and Christmas shows have mushroomed all over the metro. Expect to be late for your next Christmas party because you’ll be stuck on EDSA for hours.

7. Balikbayan season. Airport congestion goes on mayhem, thanks to the influx of OFWs and balikbayans coming home to celebrate the holidays with their loved ones—complete with balikbayan boxes in tow. Your parents’ fridge is sure to be filled with bags of M&M’s and other Duty Free pasalubong from your extended clan abroad.

8. You suddenly have a lot of relatives, friends, neighbors, and inaanak (godchildren). You don’t remember these people because you practically don’t see them throughout the year, except when they’re knocking on your doors, asking for their pamasko (Christmas gift). At Christmas parties, you get presents from thoughtful people you hardly know. At family reunions, you can barely keep up with the names of second cousins, Titos, and Titas (uncles and aunts) who bombard you with personal questions like, “When will you get married?” or “Why don’t you have children yet?” and blunt comments like, “Uy, tumaba ka! (You got fat!)”

9. Your waistline is expanding. There are dozens of reunions and Christmas parties to attend, and your Titos and Titas will tampo (sulk) if you do not eat the chiffon cake they baked or that platter of greasy hamon (cured pork) they brought. At noche buena feasts, you’re sure to spot traditional dishes like lechon, fruit salad, leche flan (caramel custard), sweet spaghetti, and queso de bola.

10. MMFF. For one week the Metro Manila Film Festival blocks out all the Hollywood and foreign films from theaters to make way for their star-studded dramas, low-budget horror movies, and fantasy films. Is it Shake, Rattle, and Roll 34 already?