I remember Martie Datu as one of those girls who was good at many things. When we were classmates in high school, she sang in a band, got along with the entire student body, and did well in both the arts and academics. I figured she would eventually succeed in business or any corporate career.

And she did. After graduating from De La Salle University in 2003, she worked in a bank, but decided to help her dad with his financial consultancy firm two years later. In 2008, she returned to banking and steadily climbed the corporate ladder. She was then promoted to a bigger position in the same multinational bank in Singapore.

To cope with the stress, she started painting during her free time. Friends noticed that her artworks looked better than the average hobbyist’s pieces. There was something about this sideline activity that made her rethink her already successful career path. “Painting makes me get up and jump out of bed in the morning. It gives me so much joy,” she said.

In 2014, she took a leap of faith and returned to the Philippines. “I really had no plans back then,” she said. She felt intimidated by other established artists she interacted with. “I didn’t go to art school or have any formal training.” 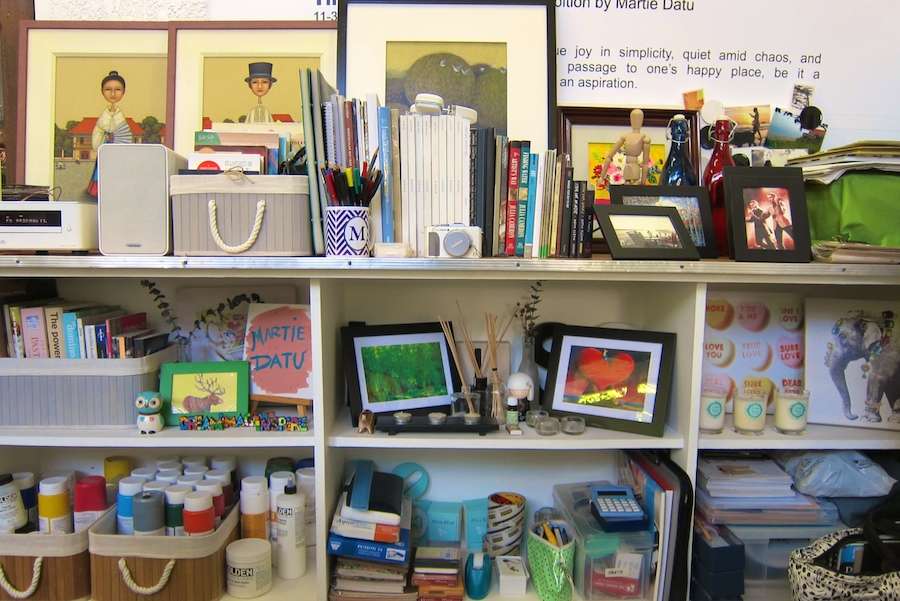 Even without formal training, Martie thrived in the local art scene. In August 2014, she had her first solo exhibit, “Stories,” in Art Galileia, Bonifacio Global City, followed by “Through Their Eyes” in Green Sun Axon, Makati, in July 2015. She’s preparing for her next exhibit mid-2016.

These days Martie gets commissioned to do paintings for individuals and corporations both in and out of Manila. A classmate from high school, now residing in California, recently posted a Facebook photo of Martie’s artwork that was shipped all the way to her home in the US.

But it wasn’t all smooth sailing. “I learn by committing a lot of mistakes and experiencing heartbreaks,” she said. “It takes a lot of courage, discipline, and hard work, but at the end of the day, seeing my paintings unfold before me and seeing others experience joy in my work makes it all worth it.”

My artist friend Paolo Icasas and I visited Martie’s place a few days ago. She showed us how she transformed a section of their family garden into her personal office and art studio, where she spends most of her day doing what she loves best—painting. Her subjects are often children and child-like pursuits, such as riding a bike or wading at the beach. The people on her painting are faceless for a good reason. It gives the viewers a chance to connect with the painting—and, not to mention, their inner psyche—and see whom they want to see. People who are fans of Martie’s work say they see their own faces or that of a loved one.

“You actually have a good technique,” Paolo said when she shared how more seasoned and schooled artists rattle her by asking if she’s expressionist or impressionist. “Even I don’t know what I am!” Pao joked, referring to the rudiments of his Fine Arts degree. He started revealing some of his biggest struggles as an artist, including dealing with dishonest appraisers.

I saw a number of paintings in bubble wrap ready to be delivered to their respective owners. We spent the afternoon sharing our own career stories and giving each other advice on how to survive in Manila’s freelance creative scene.

“Can you believe high school was eons ago?” I said. We told Pao that we all knew he would end up as an artist, especially since he had always won those art contests back then. I asked if they, too, suffer from cabin fever like most work-at-home creatives. They said yes, but we all agreed we could never trade this free-spirited life for a 9-5 job.

“I don’t think I can go back to my corporate job because I know in my heart that this is where I’m supposed to be,” Martie said. “I see my banking stint only as a stepping stone, a chapter in my story, which was instrumental to my being an artist. I see it as a path I had to take in order to reach this stage.”